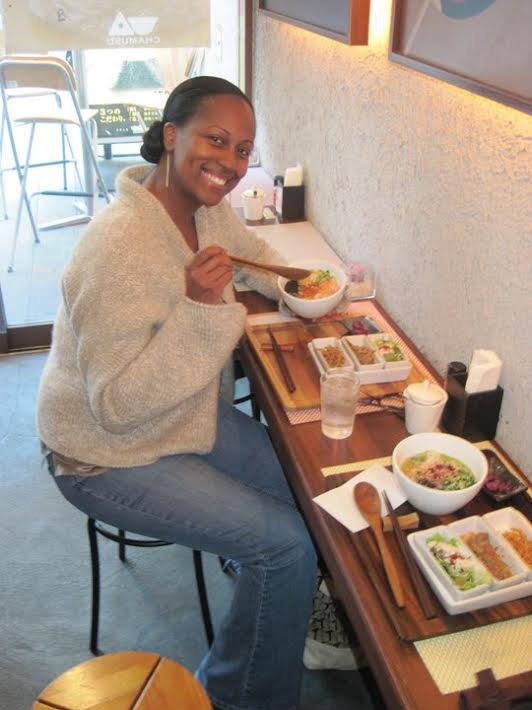 Traditional Japanese food is known as “washoku” in the land of the rising sun. “Wa” translates into peace or harmony and “shoku” means meal. In my 10 plus years of living in Japan I would say that Japanese food in all its forms from modest and nutritious home cooked comfort foods like “tonjiru” (miso soup with pork and root vegetables) to exquisite visual displays of delicious seasonal ingredients like “kaiseki” (equivalent to 3 star rated Michelin cuisines) is about engaging the senses.

It is easy and tempting for most people unfamiliar with Japanese cuisine to reduce it to stereotypical images of sushi and green tea. Some expats who have lived in Japan prefer to show their knowledge of the food culture by fixating on dishes that they don’t enjoy pointing out foods that may be considered strange or unappetizing. “Natto” which is fermented beans with a pungent smell and an equally unappealing taste for most who work up the courage to try is one such example.

These generalizations can be said for any food in any culture and consequently I am not interested in identifying my preferences but rather the appreciation I have gained for the holistic approach and respect for food that I learned during my time in Japan.

Before eating it is common practice to say “itadakimasu” with clasped hands and a slight bow. It can be considered the equivalent to saying grace before a meal in some cultures. More clearly this word of appreciation acknowledges the process of nature and people (be it the famer or fisherman to the person who prepared the meal) to make it possible to eat the dish. Too often, and even for modern Japanese, food is an afterthought and a function of biological necessity than of mindfulness and gratitude. This phrase helps me to reconnect with the act of nourishing my body and gratitude for the countless steps involved for me to eat.

Another aspect of Japanese food culture that I respect is the power of 5. It is believed that in Japanese food a balanced meal should strive for as many of the following aspects as possible; 5 colors, 5 tastes and 5 methods of preparation. For example:

The recipe options are limitless with abundant access to seafood and fresh seasonal ingredients. Preparing different colored fruits, vegetables and foods per meal helps to maintain a balance of vitamins, minerals and other nutrients. The different flavors and methods of serving the food actually adds to a greater sense of fullness and satisfaction.

I am sure many associate a good meal as having a large quantity. I was surprised to learn I could eat smaller portions of a greater variety and feel more satiated then a meal of fewer choices but in bigger sizes. I began to grasp the concept of eating to live and not living to eat.

Consequently, women in Japan have one of the longest life expectancies in the world and the residents of the southern island of Okinawa are famous for a large percentage of healthy and active residents over the age of 100. Many factors are involved in both cases but it is easy and I think accurate to conclude that the food culture of Japan is an undeniable factor. After all our body continues to renew and replace itself from our organs to our blood. The food we eat serves as the continuous building blocks for a healthy body.

Thanks to my time in Japan I have learned the value of diversity and moderation in not only food but in life as well. Japan has been a positive influence in my life in many ways and the food is a big part of my personal transformation and philosophy towards health.

Okonomiyaki is my favorite go-to recipe because the 5 minutes preparation time and up to 15 minutes cooking time. This is a simple and classic dish with regional variations with the main ingredients being cabbage, your favorite veggies , seafood or meat and flour. Another seasonings are included to add to the savory taste and a great recipe to follow is http://norecipes.com/recipe/okonomiyaki-recipe/ . I usually “cheat” by buying a kit in the grocery store that has all the ingredients premeasured and all I have to enjoy is add my favorite toppings and follow the steps. In either case the result is the same- a quick, delicious and filling meal. Itadakimasu”!

About the author Francesca Conate

I have lived in Japan for over a decade and the last part of which has been as Business English Trainer for Toshiba. Some of my highlights include: climbing Mt. Fuji twice(the tallest mountain and recently designated World Heritage site), raising funds for women and children in Sierra Leone through my advocacy work and being included in an anthology of women of color living in Asia (“Trailblasian: Black Women Living in East Asia” http://excelovate.com/product/trailblasian/).

There are no up-coming events

In collaboration with Kwabre Ne Sekyere Belgium,Mfantesman vzw,Voice of Women International, Kente FM and other African organizations, we are organizing "The Helping Hand project",is an action started in 2016, aimed at feeding the homeless in the Brussels area. We are in need of volunteers to help with the cooking, packing and distribution of food to the homeless and needy. We are also still looking for sponsors for this project. We do not accept funds but prefer sponsorship in the form of donations of desired food items, food packaging materials. if you are interested in giving a helping hand, contact us on This email address is being protected from spambots. You need JavaScript enabled to view it.

The Joint Call Board from the ERA-NETs SUSFOOD2 (SUStainable FOOD production and consumption)... More detail
Exporting Agrofood products from Nigeria

The next session of our Agrofood Entrepreneurship Training in Nigeria will focus on exporting... More detail
European Organic Congress 2021

Registration is now open for the 2021 European organic congress. The theme for this year is&n... More detail